In God we trust - all others bring data

(this is a continuation from Part 1)

Select the shapefile (and re-project if necessary)

A description of the structure of ESRI shapefiles and their treatment by the gdal library are covered here.

Let’s read the actual shapefiles. The rgdal package reads them into a spatial object: a SpatialPolygonsDataFrame, to recognise their dual nature (polygons + data).

I mentioned in Part 1 that the shapefiles from ONS (and Ordnance Survey) follow OSGB36. Here proj4string gives additional information (I suspect this function comes from proj4 rather than gdal: maybe this explains the difference). The shapefile already includes transformations to a global datum, specified by +towgs84. these consitute the famous seven point Helmert transformation. If they are absent the results will be sub-optimal (believe me!).

In Part 1 we have already encountered the “data” part of the shapefile:

Let’s see what sort of data we have inside the shapefiles.

Therefore the plan of attack is clear:
- If we need to subset the shapefile, we should be able to find the area(s) of interest searching the extended names.
- If we will need to link data to the shape we will use the code names (much more about this later).
- With respect to the Welsh, we will delete LSOA11NMW (we could just ignore it, but is going to take space for more relevant information).

As the Data Dive I’ve attended was about Leeds, I will select the shapefiles referring to Leeds.

In this case I know that all the LSOA shapes in Leeds have “Leeds” in the name. In some other case it will be more complex, but often is possible to find lookup tables to ease the task.
This gives us 482 polygons for all the Leeds area. As the average population ofr a LSOA is 1,500 inhabitants, a quick check (482*1,500) will tell us that the order of magnitude is correct. Good!

We can now plot the shapefile. Plotting the whole E+W shapefile would have been too much for RStudio, my IDE of choice (and even tools like QGIS struggle a bit for the sheer number of polygons to display). 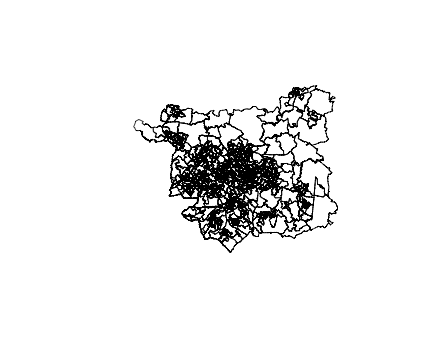 Now we will change the projection, moving from OSGB36 to WSG84.

We could re-plot the shapefiles, but probably at this stage we wouldn’t notice a major difference.

Simplify the shapefile and save it to geojson

This step is very simple. Basically a polygon contains numerous nodes, i.e. points: every nook and cranny of the area of reference is detailed. This is too much detail for a choropleth. The size of the Leeds shapefile we have obtained is around 16Mb. This would make it difficult to show our choropleth on a mobile phone.

The solution is simple: it is possible to simplify the polygons in a number of ways, for example reducing the number of nodes. We will use the well established Ramer–Douglas–Peucker algorithm (RDP) to reduce the number of points in a curve that is approximated by a series of points (please note that I’ll mention topojson later in another part of the tutorial).

We need to be careful though: too much simplification and the polygons will start to “open up”: basically they will not appear attached to each other any more and holes will start to manifest. This is where it is convenient to use tools like QGIS to visually play with the best tolerance coefficient for the simplification.
This time I will be satisfied with a reduction to ~10% of the original size.
The simplification uses gSimplify from the rgdal package.

The original shapefile has been seriously simplified and re-projected. What if we have made some mistake along the way?

A very simple, but very useful trick we can use to check on our geojson is to load it in a gist in github.

Github will render the shapefile over a zoomable map of the area (currently based on openstreetmap - see below): we can see directly the quality of what we have done so far.

Another interesting characteristic of our map is that clicking on a polygon will display its Code Name and Name. We will come back to exploit this feature later.

The method of using github is great and in my experience a fundamental part of the process, allowing to spot projection errors etc. before going too far ahead.

During the preparation of this simple tutorial I’ve discovered a few interesting things I had forgotten or I didn’t know.

This concludes Part 2 of this series. Next part will address the data preparation.